Missing Link Trust was founded by Leena Kejriwal, an artist and a photographer. Her family home in Kolkata was on the main road and behind it happened to be Sona Gachi, one of the largest red light districts of Kolkata. So her awareness of a red light district happened as a child. She had heard tales of girls and women
who were caught and put there. Everytime her car passed the lane she was told not to look ‘that side’.
Furtive glances gave her glimpses of girls and ladies standing on the roadside.

It was much later as a photographer during one of her walks in the city, that she first entered a red light district. She entered with a deadpaness and an open heart, not the curiosity which the place holds for many.
The empathy was there but something urged her to do something about it beyond it. After that first visit
to Kalighat, she had multiple opportunities to visit and help her friends in any capacity who ran NGOs
in the area. What Leena found really disheartening was that the flow of girls entering these areas didn’t stop. She saw her friends struggle with empowerment and education of the ladies and the girls there but new ones
kept coming in. The root cause they all saw was the demand. It was simple economics.
Where there is a demand there will be a supply. The demand added to the lucrativity of it, hence traffickers move in to supply the girls and make a lot of money.

And so she was hit by a very important issue – sex trafficking. Today, there are 3 million prostituted women
in India, out of which 1.2 million are young girls. The average age of recruitment of girls into prostitution
is between 9 and 12 years of age. These are disturbing statistics.

Her deep empathy for the girls started to reflect itself in her work as an artist. She dealt with the issue
by creating complicated installations within gallery spaces that brought up the dark realities of sex trafficking
in a very graphic way. But this did not seem right. To create mass awareness, she realised she needed to distill the issue into a simple, engaging piece of art that spoke to everyone and transcended language and space.
That is when the public art project MISSING emerged. MISSING was finally launched to great reviews
at the India Art Fair in January 2014.

A world where every girl is safe from sex trafficking.

We want Missing to be synonymous with awareness against trafficking for sex. We want our engagement to provide knowledge as arsenal to children, women, young girls and boys so that they can avoid being victims of trafficking. Parallelly, through all our engagement we want to have an undercurrent running across our programmes that mind shapes the young males in India into de-objectifying the female human body and creating more sensitive and empathic youth towards gender differences. Further, it would also create a more compassionate view of the victims of sex trafficking. One of the last key things is also to create an environment among young girls where they de-clutter their concept of femininity, which is currently overridden by the masculine gaze.

We aim to execute and reinforce this purpose through not only our campaigns but also primary insights through data trends generated in-house that will support and validate our endeavours. This will eventually help Missing realise its vision and also enable it to become an important catalyst in influence and
policy-making at the government level.

Missing Link Trust works is primarily based on its three key pillars – Innovation, Education and Empowerment. We use innovative mediums like gaming, murals, public art, and comics to create a highly immersive and empathic experience on sex trafficking. We educate for creating a new social fabric to end demand by systematic awareness programme amongst school children. We empower the most vulnerable women and girls in Sunderbans through skill training and livelihood to prevent sex trafficking. The flow of trafficking of victims is primarily from Eastern to Western India i.e. from the poorer Eastern states to the demand-making cities in the Western states. To curb this flow, we create awareness at the school and community level among vulnerable girls and women and community members. We focus on the linkages between child marriage and trafficking to create a more vigilant community. While reducing vulnerabilities is a complex process, it requires elements of empowerment. Missing creates digital literacy among the population to bridge the massive gap in communication and flow of information between rural and urban pockets. In addition,
we generate livelihood for local women through a bag-making unit in the region. 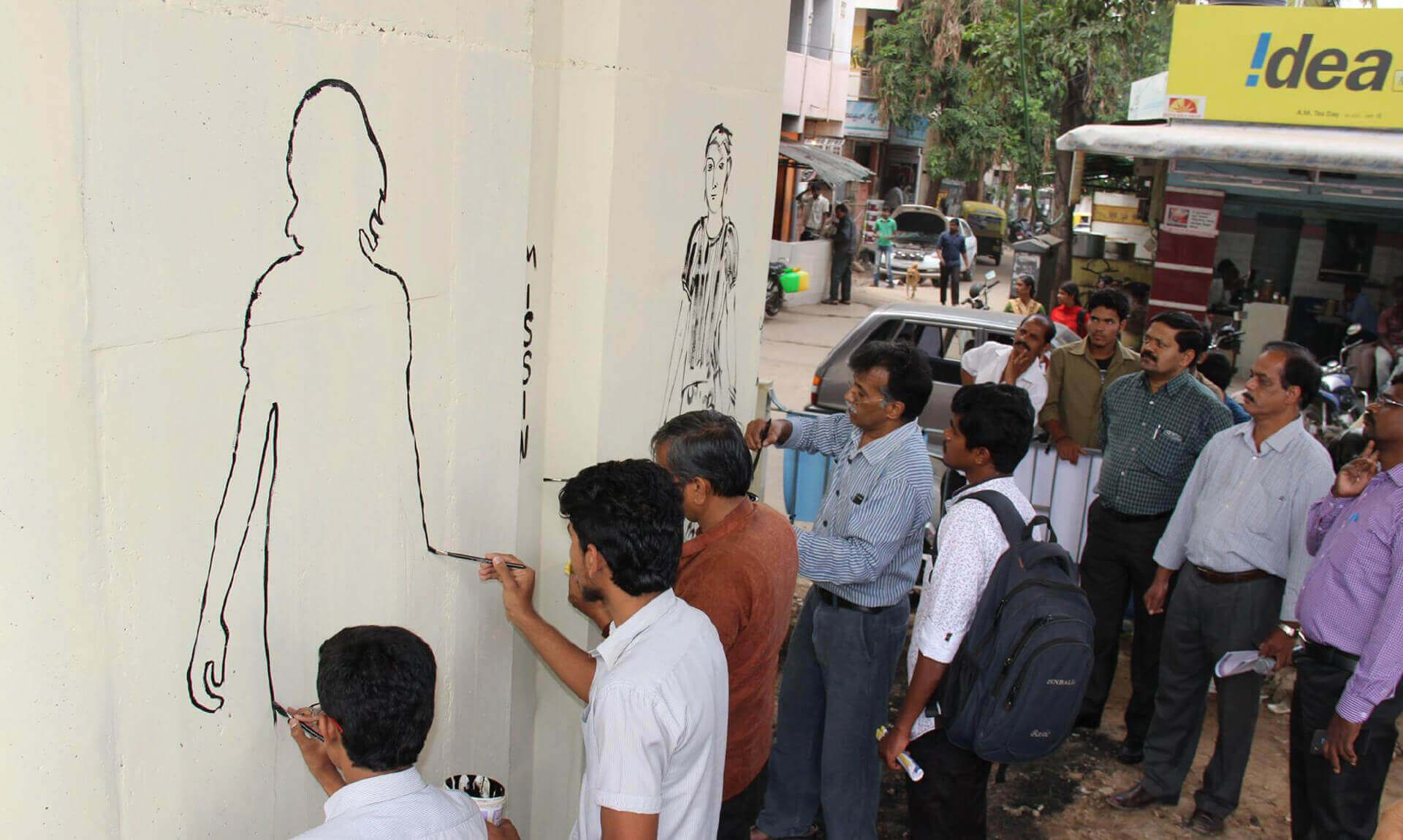 Every community needs to be made aware and included in this campaign, because it is critical for everyone to be aware and also find out there trafficking footprints. Being aware if they are, knowingly or unknowingly, responsible for creating the demand for purchased sex. The horrific supply and demand lead to human trafficking of vulnerable women, underage girls, and boys.

Missing Link Trust works across the board with partners, artists and other nonprofit organisations. Please visit our partner section to know more details.

Public engagement in today’s times goes hand in hand with the online world. We opted for crowdfunding to raise funds for the project to use the reach of the virtual world to our advantage and have the masses,
for whom this project is being done, feel a part of it from the start. In India, there is very little funding for public art from the government and corporate sector. This was a chance to prove that there is a desire and need to use art to fight social problems. We managed to successfully execute two crowdfunding campaigns – the first one with a target of Rs 16 lakhs in 60 days on Wishberry, which was used to create the first set of installations and develop the MISSING Game for the Cause (game 1) and a second crowdfunding kickstarter campaign for MISSING: The Complete Saga (game 2) for USD 50,000.

The MISSING Game for a Cause (game 1) is available for free on Android and Apple Playstore. You can also click on the game icon at the top of the page to download the same. Game 2 will be released in late 2019.

The MISSING Game for a Cause (game 1) is available in 12 vernacular languages and 6 international languages. You can choose the language of your choice once from the start menu once you download the game.

Missing Link Trust offices are present in Sunderbans, Kolkata and Mumbai. However, MISSING is now a worldwide project with organic growth in followers since we began. We have rescuers and survivors from
the trade, who advise and help spread awareness. We are also in touch with students from schools and colleges worldwide, who all feel the urge to be a part of this special awareness campaign and of course,
we work side by side with the general public, for whom this campaign is being done. What makes MISSING unique is the message behind our simple yet hard-hitting public art which we use as a visual metaphor for society’s negligence. We are using the #Missingirls Stencil campaign and MISSING Game for a cause to create awareness against sex trafficking across the globe. 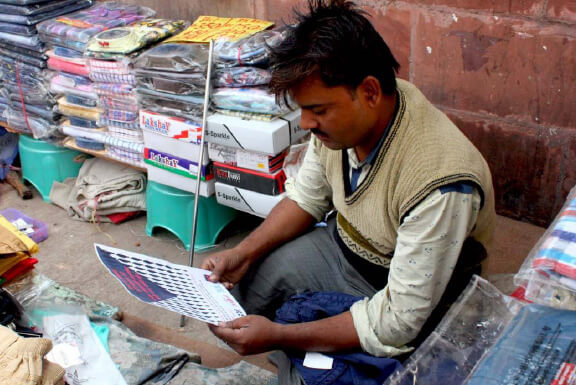 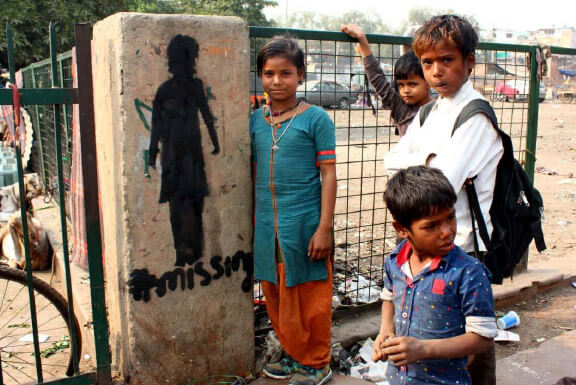 We are always on the lookout for students and professionals across ages who can volunteer to spread awareness against human trafficking. You can fill in our volunteer form or even download and use the Missing Stencil Kit to be a part of the campaign.

Thank you for your interest to help the #Missingirl movement. If you are an individual, please visit our Donate page. If you are a corporate or a group, please check the Partnerships/CSR Opportunities section for more information. Your contribution will go towards creating a safer environment for millions of young girls and empowering vulnerable women in heavily trafficked areas through livelihood projects and employment generation.

We appreciate your interest to take MISSING to a whole new level! We love working with companies who believe helping people as part of a great business model. Please visit our CSR Opportunities section or just drop us a line with your interest at reachus@savemissinggirls.com and we will quickly follow up to see how we can join hands and help vulnerable women and girls through awareness, education and skill training
in our against sex trafficking.

In addition to the local AHTU (Anti Human Trafficking Unit) police number, you should keep the following
numbers handy: